A sample of reviews for our recent productions.

“Python had some of the greatest comedy minds of the time at its disposal, but it is fair to say they would be both proud and delighted at the production currently being staged by Lichfield Operatic”

“Pete Beck is outstanding as King Arthur… he is admirably supported by Patsy, played by James Pugh, while Adam Lacey (Lancelot), Adam Gregory (Galahad), Patrick Jervis (Robin) and Cameron Morgan (Bedevere) all give splendid service. The main vocal talent, and glamour, is provided by Victoria Elliot as the Lady of the Lake”

“From start to finish, Lichfield Operatic Society’s production of Monty Python’s Spamalot this week had audiences in stitches.”

Production director Lynne Hill and the cast had obviously worked hard to get a creative balance between the pathos and the humour in the show – and they succeeded in spades.

Dance routines, of course, play a big part in The Full Monty and choreographer Charlotte Middleton devised some amazing routines perfectly performed by the cast.

“The perfect ingredients for an applauded, five-star production. I had the pleasure of attending LOS’s last night of this Lerner and Lowe classic. This long-standing, talented society never fail to deliver”

“This production was far from amateur, groups are constantly ‘upping’ their game and LOS have really created a masterpiece in Avenue Q. Slick, professional and uproariously funny”

“Lichfield Operatic Society’s production certainly provided to be ‘some enchanted evening’ for its audiences. A beautiful blend of sadness, joy and humour, set against the blackdrop of WW11, this show has everything.

A first class orchestra, imaginative direction, great choreography, superb lighting and slick stage crew made for a great night – and that’s without some stunning performances from the cast.”

“The delightful performances of the children blended beautifully with those of the adults in the show to provide a very entertaining evening…It’s impossible to mention everyone’s names in this huge cast, but suffice it to say every one of them contributed one hundred per cent to this delightful production.”

“Guys and Dolls is a classic musical comedy which could, these days, seem a little dated. But Lichfield Operatic Society this week brought a freshness to the show with a lavish production at the Garrick. The principals – Pete Beck as Sky Masterson, Charlotte Middleton as Sarah Brown, Vickie Beck as Miss Adelaide, James Pugh as Nathan Detroit, Patrick Jervis as Benny Southstreet and Oliver Rowe as Nicely Nicely Johnson – all turned in remarkable performances”

“Lichfield Operatic Society’s Jesus Christ Superstar at the Garrick this week is a first rate production. It’s quite some time since I’ve seen this Tim Rice/Andrew Lloyd Webber rock musical and it was good to hear the unforgettable songs so well performed…Eoin Edwards’ Jesus was slightly understated, which I liked, and his scenes with Victoria Beck as Mary Magdalene were both clear and very moving. Pete Beck was commanding as Pilate – he strutted around the stage and we could hear every word. An extremely accomplished performance.”

“A show at the Lichfield Garrick this week dished up a fair feast of entertainment for the packed audiences. Lichfield Operatic Society’s The Full Monty was overflowing with energetic performances from everyone in the large cast. Director Helen Gilfoyle’s ‘Magnificent Six’ as she described the lead actors, definitely lived up to the name. 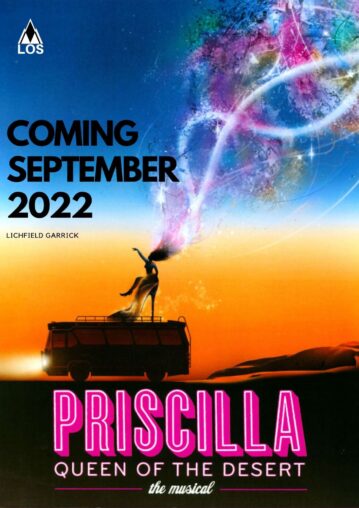